How I became certified as an EFT practitioner

How I became certified as an EFT practitioner 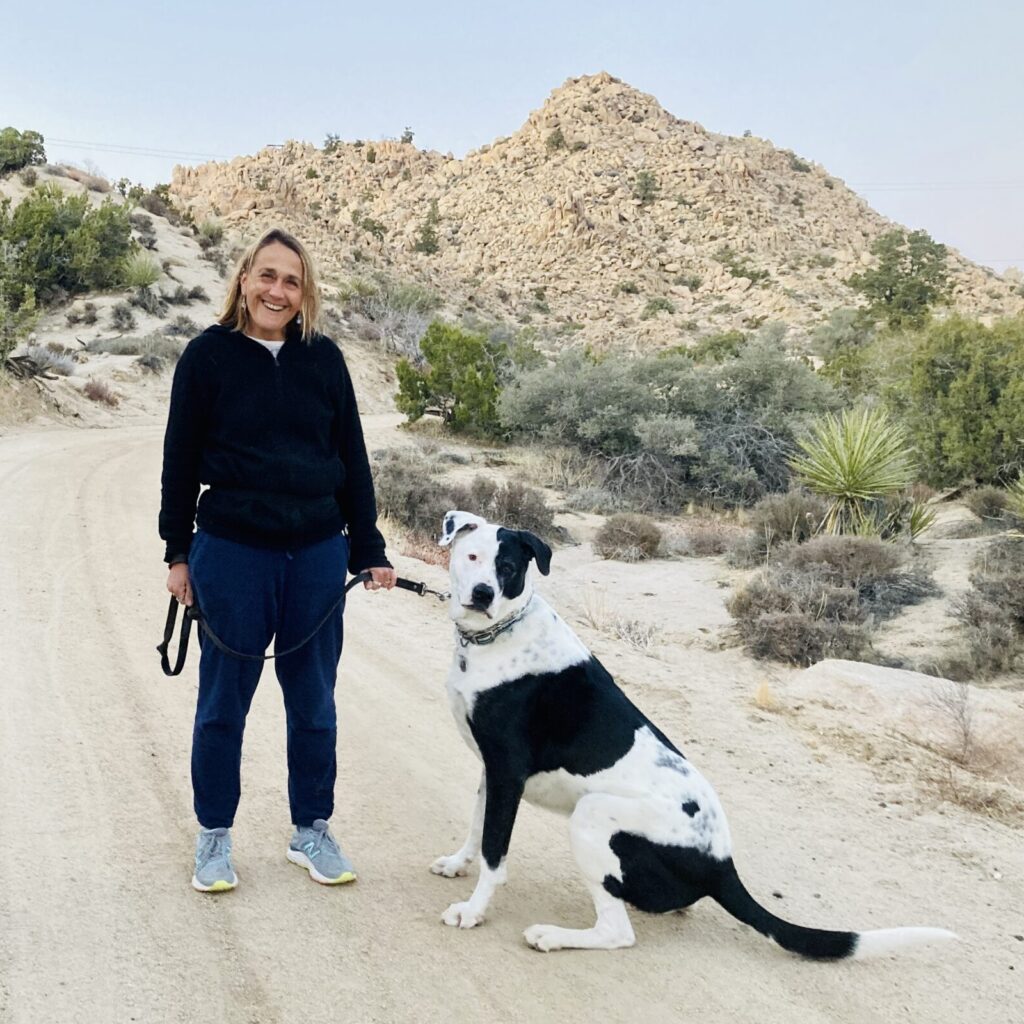 On a cold, drizzly January morning, I was walking Teeka, our 150 lb. beast, when she suddenly lurched forward, startling me. I tried to hold on to her in vain, but the leash was wet and slippery. I landed face-forward on the muddy unfinished sidewalk watching in horror as she ran towards a street with oncoming traffic on both lanes.
By some mysterious force, the cars slowed to let her pass. Teeka managed to cross without getting hit only to sniff another dog and her walker. But then she abruptly backed off, heading back across the street towards my direction this time. I quickly rose and managed to grab hold of her. The hooded person in the khaki raincoat looked around briefly and kept walking her dogs. Grateful no one was hurt and eager to get out of the rain, I headed back towards my house.

I must have been in shock because as soon as I was in the safety of our home, I began sobbing and shaking. I started tapping: Even though I blame myself for letting go of  Teeka…I still love and accept myself….and choose to reach a more calm and peaceful place…Within 10-15 minutes, all the upset of that hot mess was gone, so I moved on. 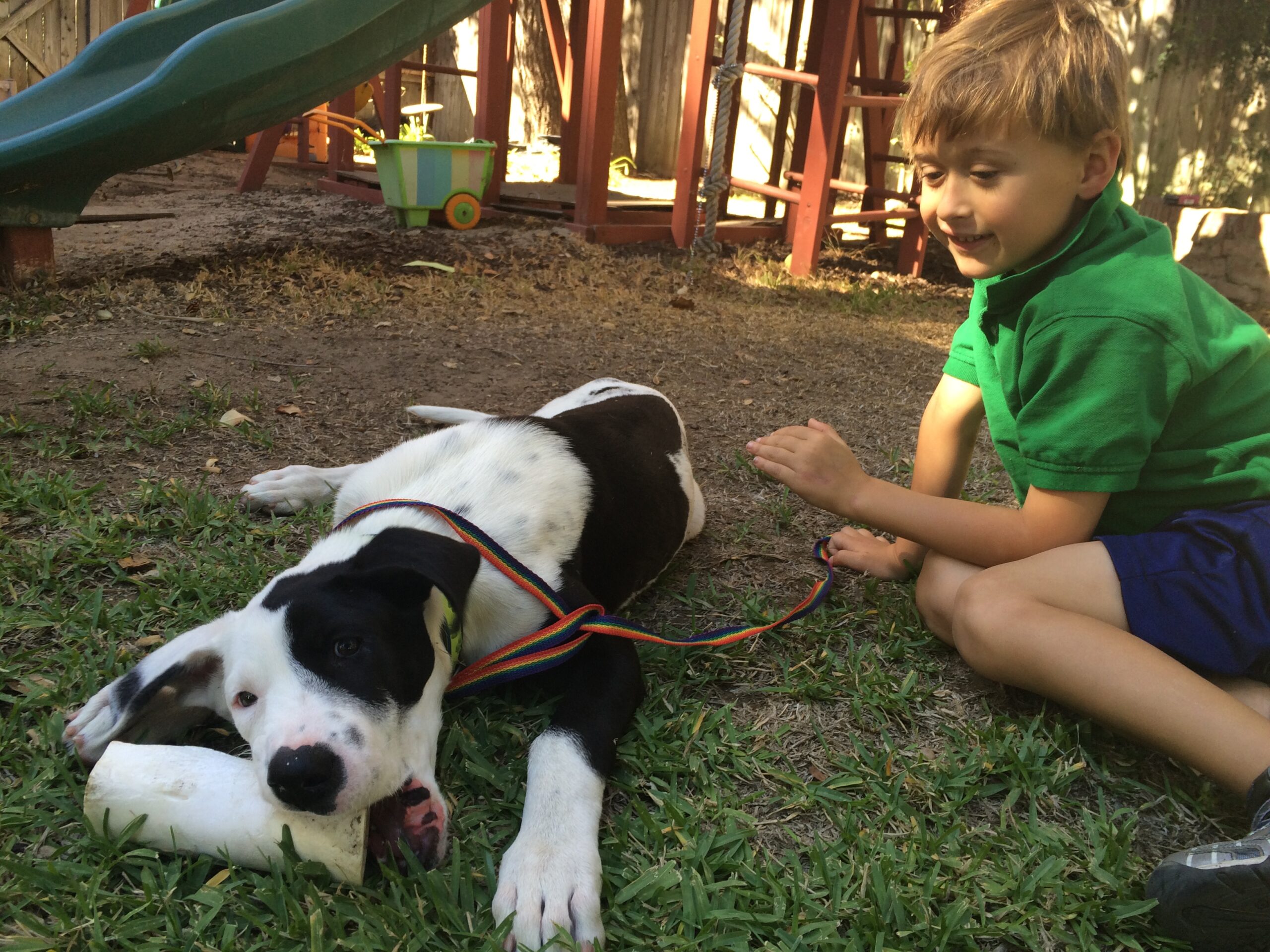 Teeka is a rescue dog we adopted when she was four months old. My 5-year-old son, Rafa, had picked her out at the Pasadena Humane Society. Our family was hoping for a medium-sized dog and the adoption team identified her as a Catahoula / Pointer mix that would grow into a 50-60-pounder. But Teeka kept growing and growing. A mere eight months later, she no longer fit into the extra-large cage, and I had to special order a custom size. She eventually matured into a 150 lb black and white Marmaduke goofball, and people often wisecrack, that she looks like a pony. Through a DNA test, we discovered she is a Great Dane / Akita mix, the latter, one of the most notoriously difficult breeds to train.

Lucky for me, I got stuck walking her because hubby has an arthritic hip.

So we poured countless money into a wide variety of puppy training classes, private dog trainers, and all types of leashes with little improvement. If Teeka wanted to go after a cat or squirrel, unless I was 100% present and never distracted, I was flying in the wind behind her or hitting the pavement as I had on that soggy day. Teeka even landed my poor 4ft 9 inch, 90 lb mom in the urgent care with a bruised eye socket

The following morning, I received this email:

I’m not sure if you saw what happened from your vantage point across the street. Teeka grabbed one of my dogs in her mouth by the back, but I don’t see any injuries on my dog. She also bit me on the arm, but it wasn’t hard and it’s just a bruise. I’m not sure why she slipped away from you….

Suddenly, I was disoriented, realizing the email was from a previous dog trainer we hired. How could I be so clueless about what had transpired across the street? A wave of guilt washed over me. But wait, wasn’t this lady a DOG TRAINER!?

I immediately called to apologize. Thankfully, the trainer, whom we’ll call Sandy, was very understanding. She also admitted she was still feeling shaken because she had not only been attacked by Teeka but another dog on her block the same week.

Now, that struck me as unusual, and I impulsively offered her a free EFT tapping session, sensing I might be able to help her feel calmer. I had just completed my EFT training workshops and had considered certification as a practitioner. However, the deadline had just passed. Sandy graciously accepted my offer, and suddenly, I was emailing my teacher, begging him to make an exception. Needless to say, he accepted me into his program, and my session with “Sandy” ended up being my first with a “real client,” other than practice sessions with classmates and friends thus far. Not only was she able to release the shock and blame she was carrying, but by the end of our session she felt relaxed, she could hardly believe it. When I checked in with her the next day, she emailed me the following note:

I am feeling better. And while I will be more vigilant on my walks now, I am not panicked like I was. My biggest takeaway was that I was blaming myself. Right after the pit bull incident, I watched the movie “Goodwill Hunting,” and the scene that kept sticking out to me was when Robin Williams was hugging Matt Damon and telling him over and over again that it wasn’t his fault. It just occurred to me today that the Lord was trying to tell me something all along… but you helped me see it. Thank you.

I couldn’t help but think of the Chinese Zen proverb: Good Luck? Bad Luck? Who knows?

This incident at first appeared like bad luck, yet there was this quick turnaround. To this day, I remain appreciative of Teeka for inspiring me

to take action and get certified, as well as to Sandy, the dog trainer for her willingness to be my first client.